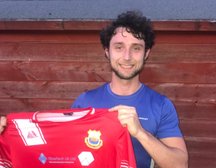 Following the start of pre-season training, Whitstable Town manager Lloyd Blackman has given an update on the playing squad for the coming season. A number of academy players trained with the first team and several have already signed Isthmian League forms.

One familiar face has also returned to the Belmont. Ollie Gray made his debut for Whitstable in August 2014 and went on to make 60 appearances before leaving for Ramsgate. He has now opted to join up again with his former manager Lloyd, who commented: “I’m delighted to have signed Ollie Gray. He’s one the fans will know very well. He was very keen to join up with the group because of his strong passion for the club and I’m pleased to work with him again. He has a fantastic attitude and is a player who offers excellent versatility and his effort and desire cannot be understated. Welcome OG.”